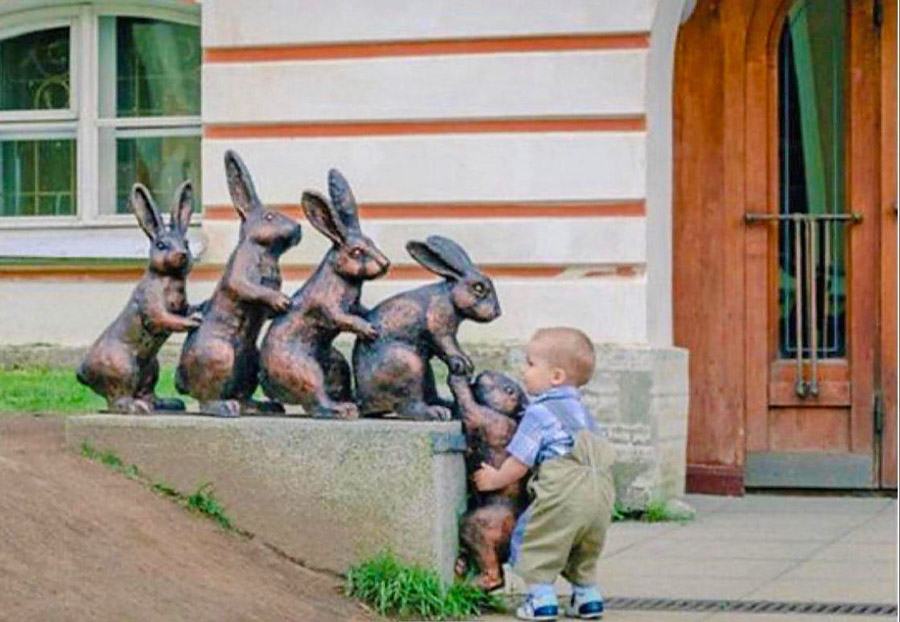 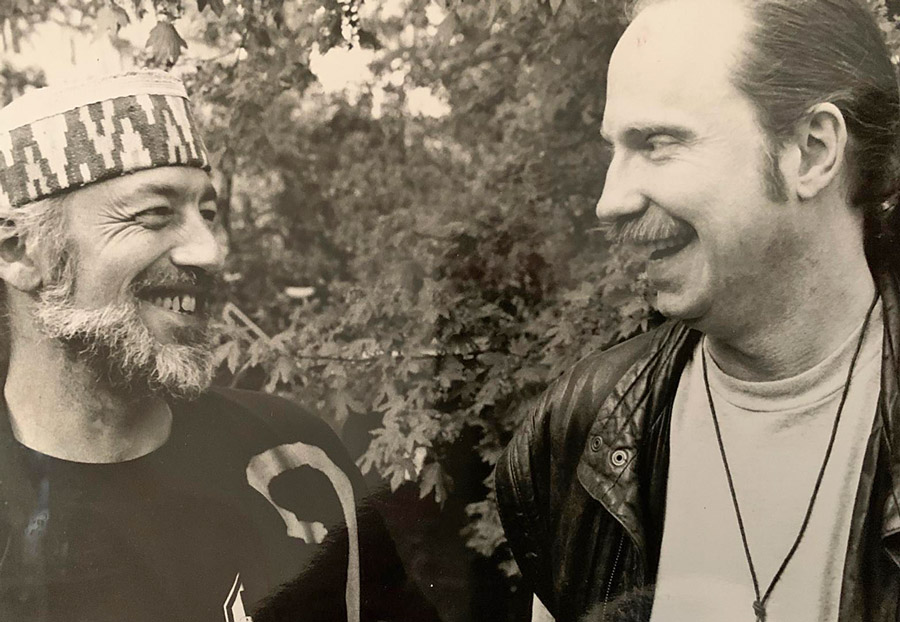 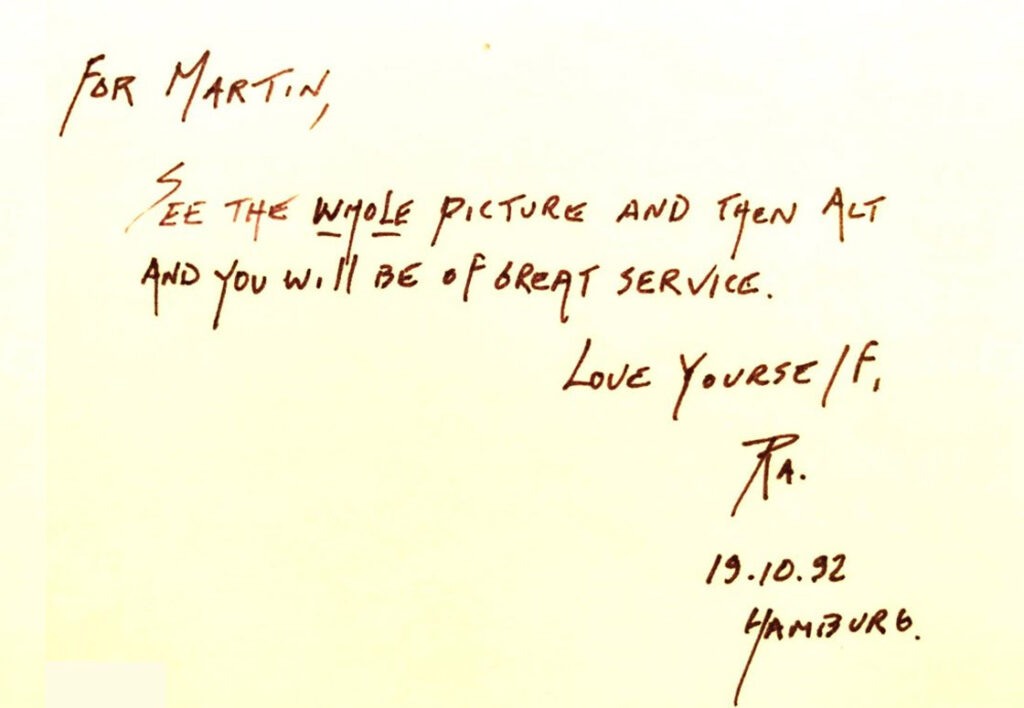 It is my concern to do justice to the uniqueness of an individual person as comprehensively as possible and to honor the special attributes of his or her individuality. Only then is it possible to address each person exactly where he feels uniquely recognized and deeply understood in the essence of his being and in the particular issues of his own life. This includes both the particular functioning of his physical metabolism, as well as his soul dynamics, and his spiritual (for some people: religious) mindset with which he sees himself and his circumstances embedded in this world.

If on all these levels the essence of an individual person is clearly seen, directly addressed and appreciated, then all resistances are dissolved that incomprehension and ignorance have built up so far. Through contact with this unadulterated nature of the soul – one’s own inner innocence – a transformation can take place within the individual, allowing him to act in greater accord with himself.

There are many ways and methods to achieve this goal. The fact that my own life has equipped me intensively with several of them by numerous fates, in order to experience them successfully first on myself, and then to let other people benefit from them – if they wish – that is a great fulfillment. To be able to experience this again and again, I am deeply grateful to life.

As the middle of three children, I was born in Salzburg on December 29, 1955. At the age of ten I received a scholarship from the Protestant Church of Hesse and Nassau and was accepted into the boarding school of the Laubacher Kantorei in Hessen (successor choir to the Thomaner/Leipzig). There I received vocal training as well as music theory training and performed many concerts in Germany and abroad with choir and orchestra.

After graduating from a grammar school in Norden/East Frisia in 1975, I trained as a bookseller in Hamburg and worked briefly in various publishing houses (Rowohlt, Hueber), setting up the Colón foreign language bookshop.

However, my love of music and my creative urge soon led me to the theater, where I worked as a musician and composer for many productions. (Among others: ‘The Glass Menagerie’ as well as other plays by Tennessee Williams, ‘If You Had Spoken, Desdemona’ by Christine Brückner / Hamburg premiere / ‘The Little Prince’ by Antoine de Saint Exúpery etc. as well as numerous musical cabaret productions / Brecht / Kästner / etc.).

Due to strong allergic hay fever since childhood, as well as chronic bronchial asthma, the ‘treatment’ of which already required stronger and stronger chemical medications in the course of my early years, my path led me in 1980 in search of a cure to a neurological physician and psychologist in Hamburg. She had long ago resigned from the closed department of psychiatry in Hamburg and turned to classical homeopathy.

When I came to her at that time, she had already been treating and curing her patients exclusively according to this method for many years – and so had I. Through this fascinating experience on my own body, that beyond chemistry, which burdens the body more and more, real healing is attainable, if the individual energetic causes for it are recognized and cleared, my interest in this possibility had become so strong that the old doctor offered to instruct me personally in it.

As a result, I had the good fortune to be personally trained by her for twelve years until her death in 1993. During this time she imparted to me all her learned and personally experienced knowledge. This included her clinical experiences as well as the individualistic aspects of Classical Homeopathy, which in its comprehensive holistic nature was also very strongly influenced by her studies in philosophy and anthropology.

I had to promise her right at the beginning to pass on everything afterwards. Since then, this has been done in my practice with patients, and in holistic trainings and seminars with students. During two years also lectures at universities ‘Introduction to Classical Homeopathy’ (Hamburg, Frankfurt, Munich, Zurich), at the Academy for Veterinary Medicine, 12 years various special seminars and trainings at the Paracelsus School Hamburg and other institutions.

During my intensive homeopathic special training I also completed an extensive and very well-founded training as a non-medical practitioner (9 semesters) at a special school for naturopathy in Hamburg. Afterwards I had the great fortune to meet the founder of the Human Design System (Ra Uru Hu), and to be trained by him personally in it, even before this system went into the world.

As a result, I became the first healer in the world to use this system in daily practice and work with patients. On that day (April 9, 1993), when the old homeopathic doctor died, I received the official license as the first Human Design Analyst in the world.

Through the immediate practical application of the system in the therapeutic context, I was able to immediately review all the insights in detail, deepen them further, and use them absolutely precisely and effectively in the sense of each individual patient. In the process, larger contexts and more concrete details became apparent to me, which soon resulted in my own training for the health-related application of HDS, which I still teach worldwide, and train teachers in.

But my search to be able to give people not only a detailed understanding of themselves based on their individuality, but also to be able to help them in a natural way physically (health-wise) just as successfully, led me further and further. It is true, the Human Design System gives us the most precise information about the uniqueness of a person. However, it deliberately targets the mind, as it is necessary for each person to understand their individuality in all its details, in order to be able to orient and behave accordingly in life through this precise understanding of their uniqueness, while being healthily in harmony with themselves. However, in the course of my decades of therapeutic work with the HDS, I have repeatedly encountered people all over the world who know everything about themselves as a result, but this does not automatically produce the desired health in the body. There was always something missing that is able to (re)organize the natural basic order that is laid out inside in the sense of individuality starting from the cellular level.

So in 2009 I was lucky enough to meet a Spanish doctor who introduced me to this equivalent, which regulates the individuality of a human being in the way it was originally intended, based on an intelligent control molecule from Mother Nature. The special feature: Unlike all other substances – even natural ones – this basic building block of life is absolutely incapable of producing any side effect, being overdosed or even harming. No wonder, because it is there to (re)build, train, strengthen and protect the integrity of each person’s individuality in an optimal way.

Thus, today I am in the fortunate position to be able to correspond and help each person in the sense of his or her uniqueness – as we know it from the HDS – also on the physical level. In the meantime we have given general names to more than a thousand symptoms and diseases – and there are more and more. In contrast to this, each person has only one health: his own, and this must be corresponded to in its individuality, in order to be able to be really strong and resistant in a completely natural way.

Thus, the bodygraph of the HDS is for me today the most precise map to help a person intellectually find his way back ‘home’ when he has lost his way in lifeor was getting lost in the wilderness. However, since the bodygrap is not the body itself, but only describes in detail its individual dispositions, today, in addition to this intellectual knowledge, the natural inner order can be restored and/or maintained by an intelligent control on the cellular level in the metabolism. Only then can the often existing disharmony of what is generally called the interaction of ‘body, mind and soul’ be in union with itself and be experienced accordingly in harmony.

Last but not least I would like to mention
my special training in ‘fatherhood’ (since 1981).

Therefore, at this point I would like to thank my long grown-up daughter Lisa (now a happy mother herself): In developing her own independence, she has taught me a lot. Especially that children always grow into their own future, not ours.

Since the Human Design System recognizes and names precisely what really suits each individual and what does not, experience has shown that it is a great and valuable help, especially for the development of children. If these insights are used at an early stage, then each child can be given his or her personal ‘education’ (growth aid) that fully corresponds to the essence of his or her individual being.

The following short list of my
special articles in the german journal ‘Zeitgeist’
can show the variety of topics to which the Human Design System provides concrete answers:

More than 200 different special articles in an own fortnightly column in the ‘HDS -update’.

These articles have meanwhile been collected in an extensive
4-part book series:

on the topic ‘Human Design System and Health

4 books in Russian language
from the series Human Design and Health:

Your way to more information

Every person is different and personal life is always complex.
That’s why in these fast-paced digital times I prefer personal contact.
contact@martin-grassinger.com

2023 Martin Grassinger    I    Developed with love by Fabian Ketz